Home / This Group Is Buying Billboards Calling The NRA Terrorists, But It’s N

This Group Is Buying Billboards Calling The NRA Terrorists, But It’s Not Stopping There 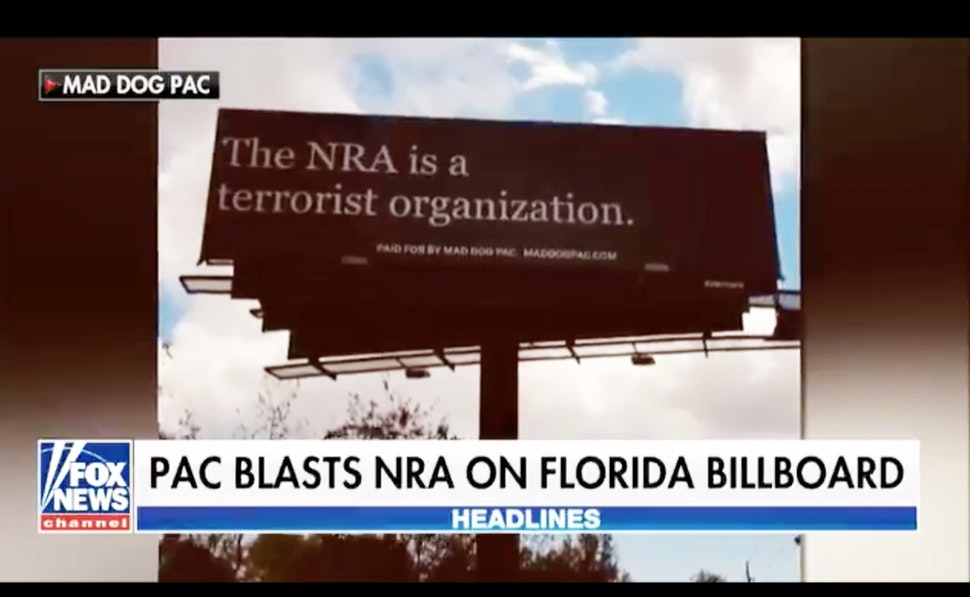 While the students who survived the school shooting in Parkland, Florida work tirelessly to organize marches and walk-outs protesting gun violence in America, another organization is joining them in the fight. A political action committee called Mad Dog PAC bought billboards attacking the NRA by calling the gun lobbying group a “terrorist organization.”

Mad Dog, according to the PAC’s website, “solicits contributions from concerned citizens to fund billboards against Treasonweasel House GOP candidates across the country.” Some of the politicians they’ve recently targeted include Reps. Kevin McCarthy (R-Calif.) and Matt Gaetz (R-Fla.).

According to the Pensacola News Journal, the organization was registered as a PAC in December 2017 by Claude Taylor, a former White House staffer under Bill Clinton. Launching its billboard campaign in January, the group has also funded signs that demand President Trump be impeached, and are now orchestrating an anti-NRA campaign.

One billboard was recently erected along North W Street in Pensacola, Florida. “The NRA is a terrorist organization,” the sign reads. According to Fox & Friends, Mad Dog PAC has said that two more anti-NRA signs have been ordered. The next billboard will appear in Pittsburgh, according to Taylor, and a third will be erected in another location in Pennsylvania. (Bustle has reached out to the NRA about Mad Dog’s allegation that it is a “terrorist” group.)

READ THE COMPLETE STORY BELOW

Source: This Group Is Buying Billboards Calling The NRA Terrorists, But It’s Not Stopping There