MCKINNEY — When President Donald J. Trump comes to Texas next month to stump for Ted Cruz, he may just be greeted by a very visible reminder of rebukes he threw the senator's way during the presidential race.

Last week, the president announced he will headline a rally to support Cruz's re-election campaign in October. The event, which Trump promised would be held in the "biggest stadium in Texas we can find," is the latest sign the two men have moved past their once fierce rivalry. But anti-Cruz activists haven't forgotten the verbal fisticuffs the two men threw in 2016 — and are determined voters here don't either

That's why Houston-based community organizer Antonio Arellano is raising money for a mobile billboard to feature some of Trump's many anti-Cruz tweets.

A mock up of the billboard features a Trump tweet from Feb. 28, 2016, when he wrote, "Why would the people of Texas support Ted Cruz when he has accomplished absolutely nothing for them. He is another all talk, no action pol!" David Hogg, a former Marjory Stoneman Douglas High School student turned anti-gun activist, and political operative Claude Taylor are supporting Arellano's efforts.

Arellano wanted to bring in $6,000 for the billboard. But on Sunday, just one day after creating a GoFundMe account, he had already raised nearly $10,000. Arellano stopped taking donations Saturday night, tweeting, "We did it — Congratulations! Thanks to your contributions our mobile billboard will be seen by thousands of Texans." 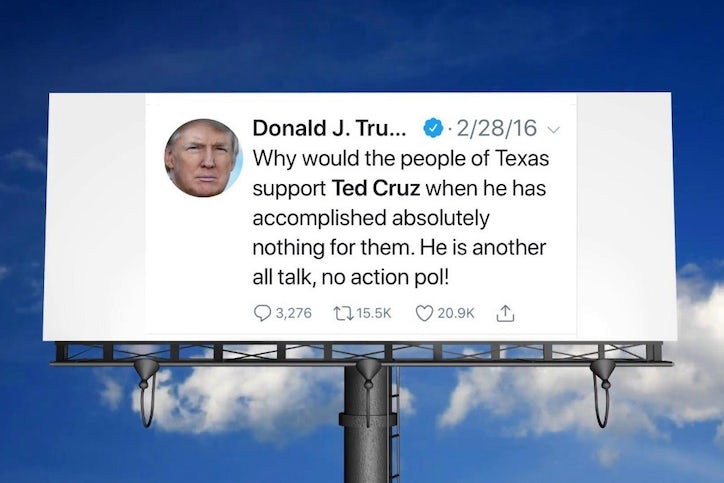 "President Donald Trump will be campaigning to help Sen. Ted Cruz win his re-election," Arellano's message on GoFundMe.com reads. "We are planning to display the presidents own words about Cruz from 2016 on a mobile billboard, to remind Texans of the truth."

The mobile billboard will roll through Dallas on Sept. 13, Arellano tweeted. Dates and routes for Houston are forthcoming.

Cruz responded by not backing Trump when the latter won the party's nomination, a decision for which he was booed at the GOP Convention.

"I am not in the habit of supporting people who attack my wife and attack my father," Cruz said at the time, according to The Washington Post. "That pledge was not a blanket commitment that if you go and slander my wife that I am going to come like a servile puppy dog for maligning my wife and maligning my father."

A few months later, Cruz backed down and endorsed Trump. Since then, the two have become close political allies. At the National Rifle Association's annual convention in Dallas this May, Trump endorsed Cruz's re-election campaign.

The president has not yet announced a location for the Cruz rally. On that day, Stormy Daniels attorney Michael Avenatti announced he, too, would host a rally in Texas at "the exact same time of Trump's." Avenatti, one of the president's most vocal critics who is mulling a run for the White House, tweeted on Sunday he wants to "fight fire with fire" and "send a message that we will fight to make America America again. #Basta."

Neither Cruz nor Trump has reacted to the billboard plans. Cruz will appear at a Labor Day event in McKinney on Monday alongside Gov. Greg Abbott and Attorney General Ken Paxton.