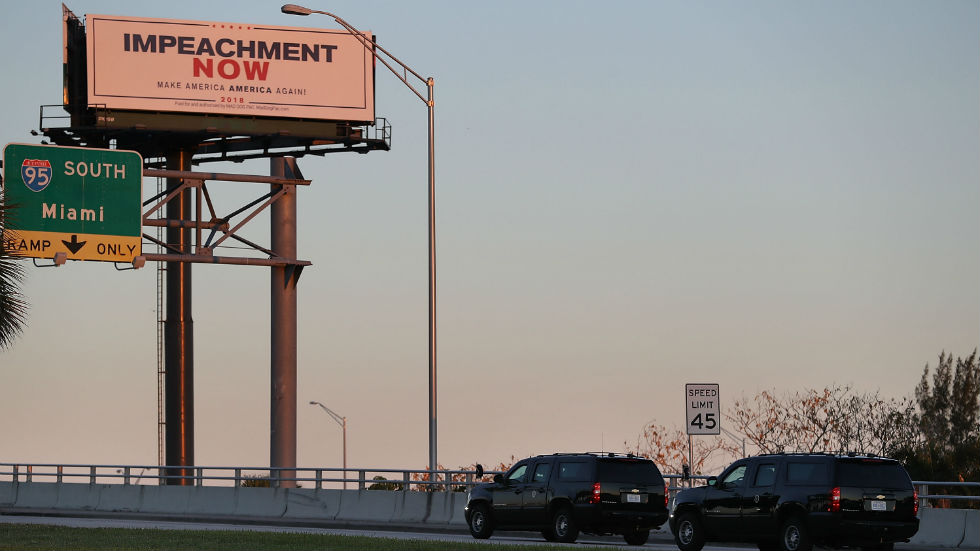 A billboard calling for President Trump’s impeachment has been placed on the usual presidential motorcade route between Trump’s Florida golf club and Palm Beach resort.

A billboard calling for President Trump‘s impeachment has been placed on the usual presidential motorcade route between Trump’s Florida golf club and Palm Beach resort.

The sign, designed in the style of the Trump–Pence 2016 campaign logo, calls for “Impeachment Now” and spins the president’s “Make America Great Again” slogan to say, instead, “Make America America Again.”

Located just two miles from the Mar-a-Lago resort that Trump often visits on weekends, the president may see the massive sign while traveling between the resort and his Trump International Golf Club, which is about 20 minutes inland.

Mad Dog PAC, a group known for its provocative signs calling out Trump and Republican politicians, is responsible for the billboard and said it is one of dozens to be posted along highways across the country.

The impeachment sign was funded by nationwide donors and is planned to remain in place for four weeks, the group’s founder told CBS 12 Palm Beach.