Home / Anti-NRA billboard up on interstate

Anti-NRA billboard up on interstate 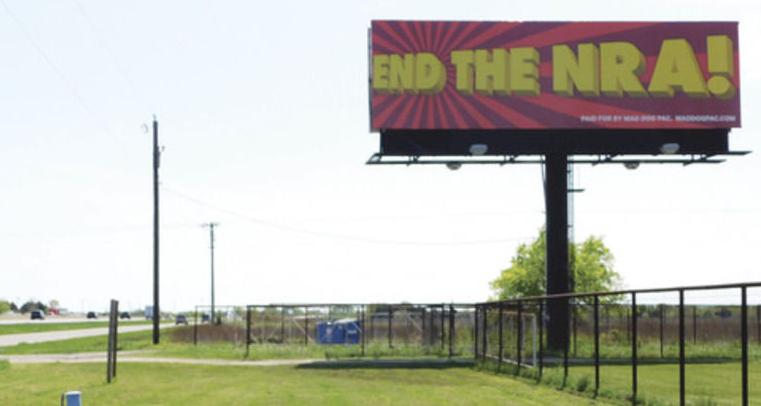 For more than a week now, a billboard on the north side of Interstate 30 has been displaying the message, “End the NRA!” near the 86-mile marker in Caddo Mills.

The message was sponsored by the Mad Dog Political Action Committee, a Democratic anti-Trump nonprofit based in Maryland that has been buying billboard advertisements around the country that target the National Rifle Association and politicians that are proponents of gun owners.

The sign in Caddo Mills is one of only a handful of signs that have been bought by the organization in Texas. Some signs are still in the process of being put up for display.

Some of the organization’s other advertisements around the nation label the rifle association as a terrorist organization.

In the past, the nonprofit has also bought political advertisements that support the impeachment of President Donald Trump.

Those who are interested in supporting the nonprofit’s various billboards can do so on the organization’s website.

Claude Taylor, the chairman of the nonprofit, told the Herald-Banner that the organization looked for billboards in areas that they thought were heavily supportive of the president when it started looking to expand its efforts to Texas.

What Taylor did not know when he first began looking for signs in the area, however, was that the billboard was once used by Ammo Depot, a local gun range in Caddo Mills.

B-Tactical, an outdoor shooting range, is also located on the frontage road of I-30 near the billboard.

Taylor said he did not know that the ranges were only a few miles away from where the message is displayed.

“I never gave any thought to it. I thought, here is a highway sign, there is the longitude and latitude, and here is the population. That’s how we decide where the billboards are going to go; it’s not based on any local business or that sort of thing,” Taylor said.

Lacey Wombaker, am employee of the Caddo Mills gun range, said customers have been asking about the sign and ways to submit complaints.

She said some customers have asked whether or not the store owners had been the ones responsible for the sign.

“There have been a few customers that said that they had thought that we were the ones that put that sign there, and we definitely didn’t,” Wombaker said.

Taylor said that it was not the intention of his organization to target businesses, or billboards that were in close proximity to gun ranges.

“I guess that’s what you would call a lucky shot,” Taylor said.

Source: Anti-NRA billboard up on interstate